Took some time to continue with this (release, holidays), but now I finally found some time to post something again:

While working on the airplanes I created a first WIP of the flying islands. We wanted to use them modular, so that we could use a small set of plants and rocks to create various islands.

With the first rough models ready and some WIP textures, we took it into Unity and made a mockup of what the game could look like. At this stage we didn’t have any clouds yet, and the only texture which was kind of ready was the one of the player airplane.

But for us this mockup was very important because it gave us a feel for what everything looks like if it’s in the same space in-engine.

This was created roughly one month before we presented it publicly for the first time at GDC 2016.

The “Rammer” airplane went through an additional concept phase because we were not entirely happy with it. The original concept... 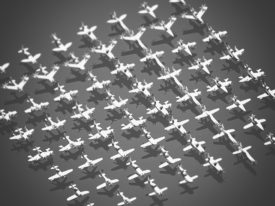 We needed more than just 4 airplanes; we aimed at about 8, so I continued creating concepts. I tried to...